In the golden age of Open Source compliance offerings, one of the key marketing argument still appears to be: „The General Public License (GPL) is sooo risky. In case of GPL infringement, you will have to release all of your code – speak your intellectual property (IP) – under the same terms. Take our license scanner as we are the best to protect you against such nightmares.“

That statement simply is not correct. But very effective if you want to sell your services. Which company wants to be forced to release its valuable IP into the public only by not following specific license terms?

This myth was supposedly framed by Steve Balmer of Microsoft who once said back in 2001: „The way the license is written, if you use any open-source software, you have to make the rest of your software open source. […] Linux is a cancer that attaches itself in an intellectual property sense to everything it touches. That’s the way that the license works.“

His general understanding of one of the basic principles of Free Software and the GPL – reciprocity – speaks of great intellectual power. However this muddle-headed theory in total is utterly wrong but still persistent today serving as one of the main arguments to sell license compliance offerings.

Even infringing the terms of the GPL will never force you to put your own source code under the same license. Simple as that.

Sure, in the worst case you have violated a software license. In this aspect there is no difference between the GPL or any other even proprietary license. Copyright infringement claims are caused by

You have to cope with its consequences. Legal remedies are

Not more, not less.

The most straight forward way out of this would naturally be to release your source code also under the terms of the GPL. Thereby making it public. This is what is understood as reciprocity – others can also benefit from your work, as you did from the original work. It is the recommended choice of the Free Software community.

But in case you want to protect your IP by keeping your own code secret, you are still left with various other options:

The best wrap-up I have read is given by Heather J. Meeker in her book „Open (Source) for Business: A Practical Guide to Open Source Software Licensing“. A must read not only regarding this issue.

To conclude – whenever you hear such statement, be alarmed and listen more carefully to assure that the talking alleged expert really offers the necessary expertise to help you with license compliance.

Over time Mozilla’s Thunderbird may happen to require some maintenance in order to continue running smoothly. Symptoms could be that either you cannot find mails that are supposed to be there, mails are doubling without any reason, or deleted mails show up again in its original folder.

Note that Thunderbird must be closed (and really not running) for the next steps to be successful. You then need to navigate to your profile folder and execute the given commands at the root of this directory.

END_OF_DOCUMENT_TOKEN_TO_BE_REPLACED

Network World has recently published a map of countries that either encourage or mandate for consideration the use of Open Source software within their governmental institutions: 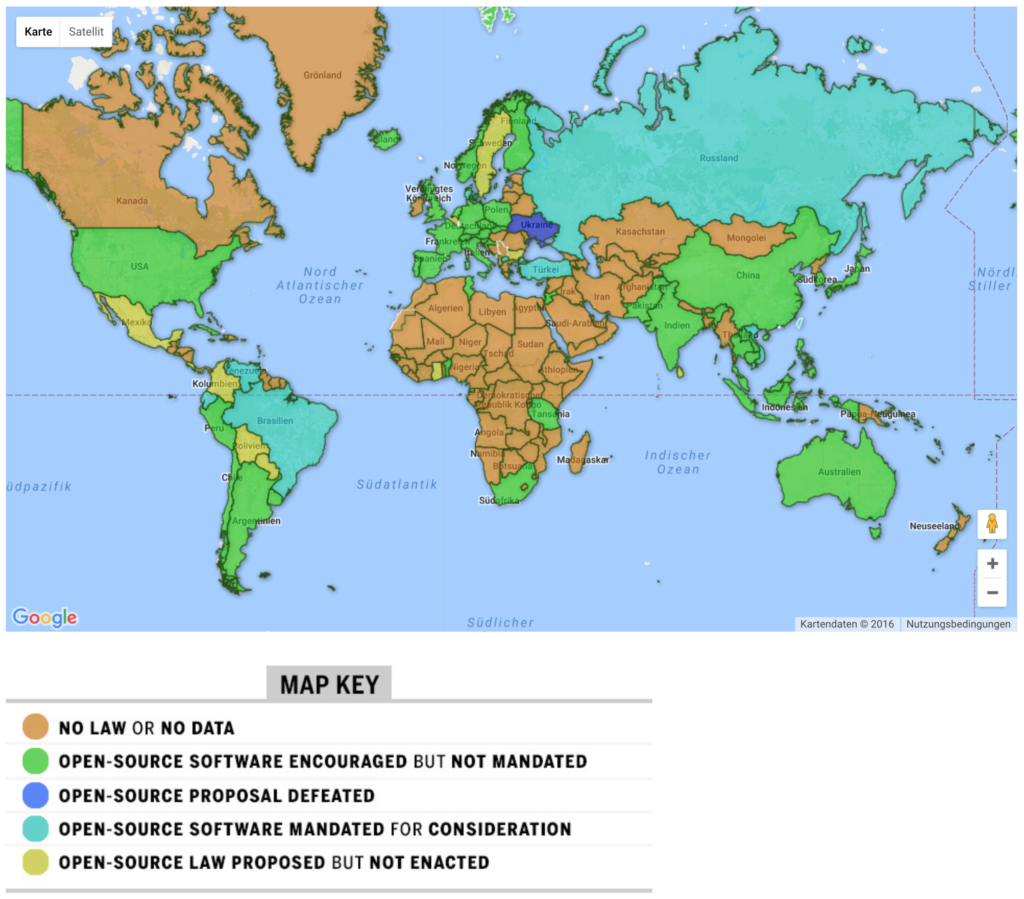 The article by Jon Gold is entitled „Which countries have open-source laws on the books?“ and also points out that it is not that easy to provide a distinct and reliable picture.

END_OF_DOCUMENT_TOKEN_TO_BE_REPLACED

The article about my previous research has finally been published in the IMIA Yearbook 2013. It is meant to provide a practitioner’s perspective on the use of medical free/libre and open source software (FLOSS) in clinical routine. In this context I examined and presented the opinions and experiences of chief information officers (CIO) working at larger hospitals. The abstract reads like this:

Objectives: To assess and analyze the attitude of health IT executives towards the utilization of specialized medical Open Source software (OSS) in Germany’s and other European countries’ health care delivery.

Methods: After an initial literature review a field study was carried out based on semi-structured expert interviews. Eight German and 11 other European health IT executives were surveyed. The results were qualitatively analyzed using the grounded theory approach. Identified concepts were reviewed using SWOT analysis.

Results: In total, 13 strengths, 11 weaknesses, 3 opportunities, and 8 threats of the utilization of OSS in a clinical setting could be identified. Additionally, closely related aspects like general software procurement criteria, the overall attitude of health IT executives, users, and management towards OSS and its current and future use could as well be assessed.

Conclusions: Medical OSS is rarely used in health care delivery. In order to capitalize the unique advantages of OSS in a clinical setting, complex requirements need to be addressed. Short-comings of OSS describe an attractive breeding ground for new commercial offerings and services that need yet to be seen.

I am looking forward to your feedback!