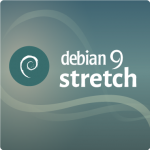 Right in time for the WWDC 2017 and the release of Debian 9 Stretch, a quick guide on how you can enrich your Macintosh with a free operating system.

Meanwhile older hardware from Cupertino like my Macbook Pro (Late 2013) is well supported by most GNU/Linux distributions. It is not anymore a thrilling adventure to get its components working like it used to be a few years ago. They just work out of the box.

What I still find quite challenging is to choose for and set up a working boot process. My goal is to be able to easily boot GNU/Linux as well as macOS. So this is mainly what this HowTo is all about.

My recipe includes rEFInd as boot manager, without GRUB and relying on the EFI stub loader that is since kernel version 3.3.0 an integral part of it.

Some details about the used hard- and software.

I prefer the following partitioning schema on a 512 GB hard disk:

To achieve this the following steps are required:

By now you should be able to choose if you want to boot either macOS or even better GNU/Linux. So give it a try and reboot. rEFInd should come up offering you both options. Now let’s continue to finalize things.

Disk Encryption and Reactivation of SIP

Note: You will need to use non-free software to be able to use your Wifi interface or run the official nVidia driver. To do so activate the contrib and non-free packages sources.